Is Coconut Oil Still Good For You? 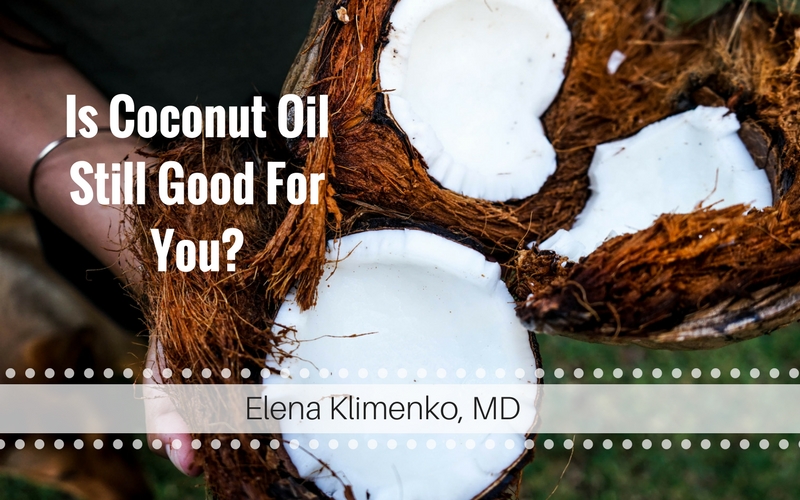 23 Jul Is Coconut Oil Still Good For You?

Yes. Coconut Oil Is Still Good for You. Here Are 4 Studies That Suggest Why.

You’ve probably seen the coconut oil articles spreading around social media. With headlines like “Coconut oil isn’t healthy. It’s never been healthy” and “Coconut oil is out” it’s no wonder people are confused.

These articles were spurred by an American Heart Association (AHA) report that revisited their dietary guidelines on fat and cholesterol. Overall, they didn’t really say anything new since they’ve been incorrectly blaming saturated fats for cardiovascular disease (CVD) for decades.

But in this AHA report, they emphasized the use of polyunsaturated fats over saturated fats. And what shocked the health and wellness industry further, is that they recommended dangerous, inflammatory vegetable oils over coconut oil.

I want to take a moment and set the record straight about some of the key points in the article.

The report does recommend that 6 percent of your diet come saturated fats, which would be about two tablespoons of coconut oil. That’s a good amount of fat and coconut oil.

They then said that coconut oil had “no known offsetting favorable effects.” This isn’t true. Coconut oil raises your HDL cholesterol levels, which studies have shown reduces CVD risk. More importantly, your LDL to HDL ratio is a better indicator when examining your risk for CVD than LDL alone.

Polyunsaturated fats from vegetable oils are packed with omega-6 fatty acids which are inflammatory. While you do need some omega-6s, many Americans eat up to 50 times more omega-6s than they should and vegetable oils found in processed foods and fast food restaurants are one of the major culprits.

Vegetable oils are also bad for you because they break down readily under heat when cooking. Polyunsaturated fats are easily oxidized when heated meaning they will react with free radicals in the body and can cause cell membrane and DNA damage.

Now that we understand where a lot of the confusion surrounding this report came from, let’s take a look at the ways coconut oil is good for you. And remember, as with most things in life – moderation is key.

4 Studies That Suggest Coconut Oil is Good for You

Studies on coconut oil are typically relatively small and require a little interpretation and gentle extrapolation for the purpose of making your own decision on whether or not you’ll incorporate coconut oil into your diet. Overall coconut oil is a safe food that should be experimented with to find if it’s best for you.

Both groups consumed about two tablespoons of their respective oils each day, walked 50 minutes, and followed similar low-calorie diets.

What this means for you: Try switching out any vegetable oils you use for coconut oil and note the changes. Adding coconut oil to your diet could be especially helpful if you are overweight or struggling to keep inflammation down.

2. Simply adding coconut oil to your diet (with no other changes) may increase weight loss

While a study of twenty people isn’t large enough to determine direct cause and effect, it does suggest this is a simple and safe experiment you can try. Just watch your sugars and carbs while doing that.

What this means for you: Why not do this yourself? Try adding two tablespoons of coconut oil to your diet each day for four weeks without changing anything else and see what happens. You may find coconut oil to be beneficial to you.

Coconut pulling is an age-old Ayurvedic technique thought to help fight plaque-forming bacteria in your saliva. A study of 60 people swished with either coconut oil or chlorhexidine mouthwash and their bacteria levels were measured before and after. Both mouth rinses significantly reduced the Streptococcus mutans bacteria.

Because there was no difference between the two washes and chlorhexidine is a disinfectant – coconut oil is a great natural replacement.

What this means for you: Add coconut pulling to your dental hygiene routines for a natural method that promotes good teeth health.

What this means for you: Again, a study of 25 women is not enough to be conclusive but it does suggest that it might be a good idea for you to see how coconut oil impacts your personal health, especially if you are struggling to maintain a good LDL to HDL ratio.

The Importance of Interpreting Data for Yourself

Beyond the irresponsible and misleading arguments regarding the cause of cardiovascular disease and the strange attack on coconut oil, the AHA is recommending polyunsaturated vegetable oils, which is downright dangerous.

A big concern is that the  – American Heart Association – packs authority. And they’ve published a poorly researched, grossly misguiding report. One that’s being repeated across mainstream news outlets across the country.

It seems surprising that the AHA would recommend vegetable oils so freely when there are mountains of data to suggest that it’s bad for your health. But then at the bottom of the report, you can see that some of the funding for the AHA and the report come from The Canola Oil Council. That’s concerning.

I encourage you to take information such as the AHA reports and keep a critical eye. Our bodies are fundamentally similar but also unique in how we metabolize and respond to environmental inputs.

Determine through careful personal experimentation whether or not adding coconut oil to your diet is good for you. Listening to your body and noting reactions is one of the best ways you can make the shift from treating symptoms and illnesses to encouraging optimal health.

Elena Klimenko, MD, a certified functional medicine physician, will help you choose the right course of action to improve your nutrition. In her practice, she uses herbal and food-based supplements to help patients address the root cause of their medical symptoms. Call today to find out more about functional medicine and speak with Dr. Klimenko at 212-696- HEAL(4325).

If you want more information about Functional Medicine, contact us to receive a FREE copy of  Dr. Klimenko’s E-book.